We are happy to welcome Mary Ellen Graybill, a local journalist I met after giving a presentation on Spring Tonic Herbs at the Partners In Thyme herb group based in York Co. She expressed her passion in herbalism and wanted to get involved with our farm. She is now one of our work trade students part of our Herbal Immersion Course and will be writing about the farm this season. Stayed tuned for fresh posts on what is happening at Lancaster Farmacy! 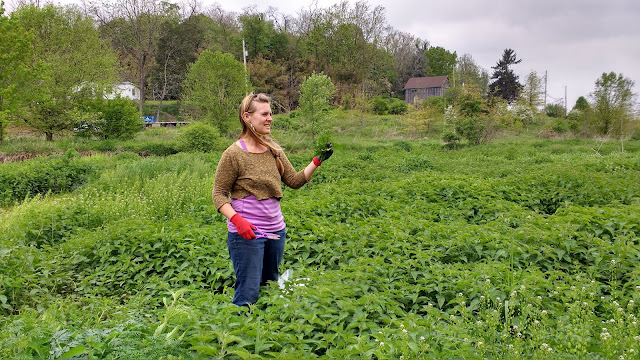 Photo of Elisabeth talking about how to harvest stinging nettles.

"In farming, you can make plans, but there are so many things that can go, potentially, the wrong way," said Elisabeth Weaver, one of two founders of Lancaster Farmacy, on May 12, near the beginning of the 2016 spring growing season. Asparagus and rhubarb already has been picked, the watermelon crop is struggling, and wild nettles are in their glory.
Lancaster Farmacy, has as its goal connecting people to the healing power of herbs, as well as providing  organic vegetables and fresh picked flowers, both for Community Supported Agriculture and to the wholesale trade. Business is growing!

The infusion of herbs into tea is a big draw for consumers and right now through October at the 5-acre rented farmland, volunteers and work-trade participants are getting to the work of planting, harvesting and packaging medicinal herbs. Learning about farming from seed to seedlings to cultivation and production, medicinal salves, earth skills and more is offered in a summer program by Casey Spacht and Elisabeth "Eli" Weaver.

These two experienced herbalists want to share their knowledge of organic medicinal herbs, flowers and produce and thus restore the native healing traditions. A member farm of Lancaster Farm Fresh Cooperative and founders of Community Supported Medicine, they have been teaching workshops and helping other farmers to grow healthy alternatives to sprayed, and genetically modified produce since 2009.

"I was kind of self- taught," said Eli, who got her green thumb from her mother and her DNA for herbalism from a paternal great grandmother.

"It's really about what' s fresh," said Eli picking the best leaves for an order for nettle to be picked up at the farm on a cool May 12 afternoon. Eli, the found and volunteer Sheryl Alvarez and Kathlynn Doughtery, work-trader, and Katie Landis who oversees work-trade operations---all worked side by side to gather nettles for the pickup at 3:30pm. They located the best, cut and shook out the bugs, bunched the best of the nettle growing wild by a meandering stream through Jim Weaver's 16 acres, where Eli grew up.
According to famous herbalist, former USDA compiler of the world's largest data base of medicinal plants, Dr. James Duke, (85 and still growing at his farm in Maryland), nettle helps against hay fever and allergies when ingested in capsules  better than a pharmaceutical. Dr. James Duke's "Sniffler's Soup" is made from Evening primrose leaves,  stinging nettle, and diced onion added to any soup recipe. according to Dr. Duke's "ESSENTIAL HERBS, Page 104)

"There you go, I've wakened up all my circulation," said Eli, about the stinging that happens when the leaves touch your skin. But it only lasts a little while, maybe five minutes. Wearing long sleeves and gloves when picking is the best prevention if you are foraging in your back yard!

In times past, people picked wild herbs that grew around them, but foraging for these plants is getting less and less possible, as there are less wild places that grow them. However, with renewed interest in medicine with no bad side effects, people may start cultivating these "weeds" for their medicinal uses. Stinging nettle, for example, is a known diuretic, astringent, treatment for anemia, gout, poor circulation, enlarged spleen, lungs discharge, internal bleeding diarrhea, dysentery and, in Germany has been used to treat prostate cancer. In Russia people are known to keep potted nettle on the kitchen window sill with an aloe plant next to it in the belief that an occasional sting is good for arthritis.

It is important to note that the fresh plants sting, but the tea which uses the dried (and "Garbeled", sifted) leaves does not sting. (Peterson Feld Guide, Eastern/central MEDICINAL PLANTS by Stephen Foster/James Duke)

Eli said, "Obviously it changes from year to year. We ask ourselves if we like growing it, was it worth our time? Then, we either cut back on it, or grow more. Right now, it's the watermelons. We put a lot of time into them and we might not get anything out of them."
Eli has come a long way from the talented artist without a care in the world as she once sat by the stream hearing the ripple of water and hearing the birds, watching for insects and an occasional rabbit. She learned from a library book she opened from the public library in Lancaster that it was dedicated by her paternal grandmother to her great-grandmother. Now Eli and Casey, and son Quehanna,4,  are a family working towards making Lancaster Farmacy a success learning as they go.

We will look forward to learning more about planting, growing and harvesting and marketing the organic herbs as medicine!

Posted by Lancaster Farmacy at 8:46 AM

Community Planting Days at Lancaster Farmacy! Come get dirty with us 5/14 and 5/21 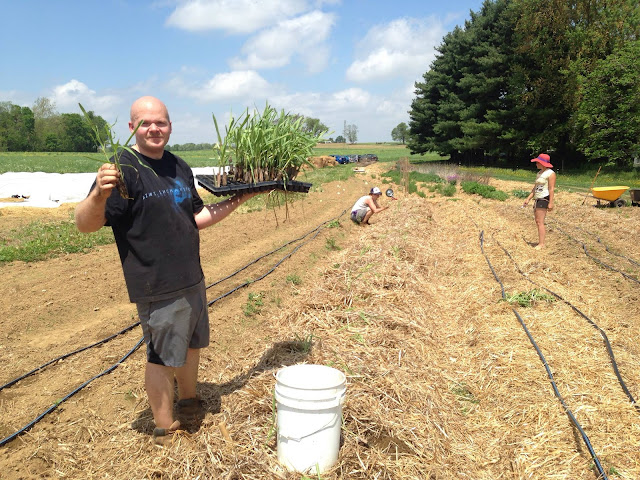 Come get dirty with us! We invite you, your family and friends for our planting party days! This time of year we have thousands of seedlings coming out of the greenhouse. We need your help planting their roots into their new home at Lancaster Farmacy! Your help will directly support small scale local organic agriculture. Imagine the connections we make from our farm growing nutritious produce, medicinal herbs and flowers that end up on kitchen tables, school cafeterias, and in herbal medicine products!
Please invite any of your people to come be a part of this exciting homecoming. Children are welcome. We will have herbal tea, snacks, and other surprise goodies to take home.
Saturday Planting Party Day Dates:
Saturday May 14 , 9-3
Saturday May 21, 9-3

Look out for the stone retaining wall, enter the lane up the hill and continue until you see our farm sign and follow arrows to parking. Carpooling encouraged and an easy bike ride from Lancaster city.