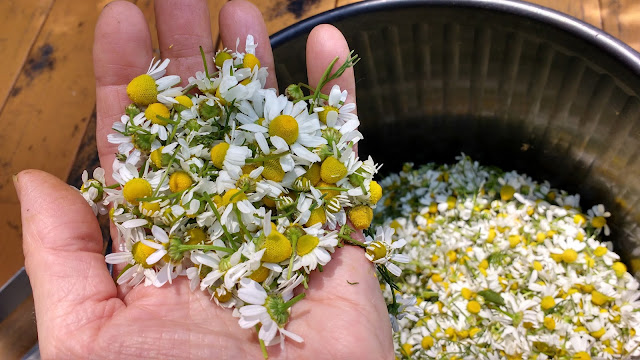 By Mary Ellen Graybill
Herbs, like people, function best when the group has a common ground. Chamomile is a good example. Each tiny flower can easily be disregarded as a flowering stem of a weed. In a group, it becomes a bed of white dots with yellow centers sprinkled atop a soft green bed of feathery ferns. It responsibly waves in a breeze on any hot day, sending its mildly aromatic scent up to the witness, or harvester. And, its flowers pop off by a handy rake device, and give up their sap of life.

You don't have to know all the scientific names of the German Chamomile such as "matricaria chamomilla" to enjoy a cup of the tea. The flowers are used in tea for stomach ulcers, fevers, stress, insomnia and even arthritis.  Having such good credentials in the healing cupboard, there are people that might find that this member of the ragweed family brings out the allergies, and should be avoided. In addition, the teabags sold in most stores are reportedly not effective medicine, and have a softer, less strong flavor. For medicine, you will want local, wild, organic, fresher Chamomile, which is the kind that Lancaster Farmacy is growing and packaging for their customers of CSM (Community Supported Medicine). The internet has several sources that indicate that chamomile from Egypt may be than 10% organically grown and harvested under poor conditions.

Herbs like chamomile often flourish in forgotten beds, Each tiny flower sits on a fernlike stem like a weed. In a bed, the yellow and white flowers create a beautiful wave of color. Its flowers easily pop off by a handy rake device. (See picture)

It is a pungent and bitter taste which, in Ayurveda ("Science of Life" from ancient India) means it pacifies the Vata dosha, or the nervous, creative nature of a person. Chamomile tea can help you get to sleep. German Chamomile, the most researched chamomile,  is called a nervine, antispasmodic, and anti-inflammatory herb.
George Weigel, a garden columnist for the Patriot News and author of several books on horticulture and edible plants for the landscape, says, "It makes a great cup of tea, and it's a beautiful border plant."

Any advice given about herbs as medicine has to be preceded with a disclaimer, due to FDA laws. There have been studies about the healing effects of the German Chamomile, and fewer about Roman Chamomile.  The flowers of the German Chamomile are useful in concoctions for healing eczema, reportedly.
The flowers have a flavor of apple and the scent while picking will be mildly soothing. Just don't do what I did on my first day out in the field picking chamomile. I fell asleep after lying down for a minute.

"Are you all right?" said Katie, the hard-working and inspiring supervisor of us work-trade workers.

I decided to try talking to the plants after my snooze, as well as get the job done. I would bond with the flowers. Maybe it would get easier. Before picking off the flower tops, I said to the plants, "Thank You for your healing."

"If you cooperate and pop off your flowers easily, I will see that you will be part of a bigger purpose- making medicine that will help people. And then people will respect and keep you in their yards!" Think of it- acceptance as a medicine, going into the best homes as a tea!" Just then, the stubborn little individual flowers seemed to jump off their stems, dancing at the chance to join their neighbors in a bucket destined for making history!

Destined for the drying room, the four pounds I picked today were spread out on flat screened drawers to dry. They are all going to be packaged as a delicious, soothing cup of Chamomile tea or as a soothing skin salve as part of the CSM (Community Supported Medicine) that is pioneering its wares right here in Lancaster, on a 5 acre farm called Lancasterfarmacy!

*Please check with your medical doctor and verify that this herb is safe for your consumption, and compatible with any pharmaceutical medications. This article is not meant to give medical advice for any medical condition.

Posted by Lancaster Farmacy at 7:09 PM