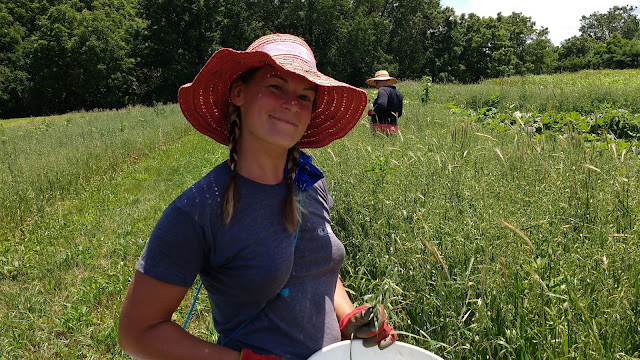 The song goes, "Do you or I or anyone know how oats, peas, beans and barley grow?

We who have the fortunate opportunity to do the work-trade at Lancaster's only CSM, Community Supported Medicine program located on a five acre farm, we know!

"First, the farmer sows his seed.
Then, he stands and takes his ease,
Stamps his foot and claps his hands,
And turns around to view his land."

By last week, the milky oat tops of the Milky Oat Seed (Avena sativa) on the farm were ready for harvesting. Work-trader Maria Weaver and I with Katie Landis were in the field diligently harvesting the juicy shells, avoiding picking the grass.  Gathering the shells by stripping them off the stems was fun, and easy. An hour or two hour flew by until the bucket we had around our necks got heavy with the pickings. Although I didn't stamp my foot and clap my hands, I did take a break from stripping the seeds to pick out the grasses in my bucket.

"Don't worry about picking out the grass now," said Katie, "We will do that later."
These seeds were destined for the drying room back at the barn. Back at the table outside, under the pine shade, we sorted out the grasses that got into the buckets. Time was of the essence.

This crop has only about a week window of opportunity to be picked, because after that the milky tops turn into oat grain. The milky tops are the liquid medicine that goes into a tincture to support nerve tissue, called myelin. Myelin is like a coating that protects the nerves of the body as impulses go through them. Strokes, inflammation and other conditions can cause nerve damage. MS is one example of a disease caused when the myelin sheath is damaged and symptoms are profound due to weakness and other problems.

A tincture of milky oats soothes the nervous system and has no side effects, and no contraindications unless you are allergic to oats.

"Next, the farmer hoes the weeds.
Then, he stands and takes his ease,
Stamps his foot and claps his hands,
And turns around to view his land."

The oat grass grew well at Lancaster Farmacy this year with just enough rain and the bright sun. And weeds were scarce in the dense green grasses.

Seriously, for addictions, the tincture of the Avena sativa Milky Oat Seed is a tested antidote for smoking cessation, even opium addiction and other addictions. Some clinical tests have been done, but more research is underway.

Combined with skullcap, lavender, and st. john's wort, the milky oats tincture can interact with pharmaceutical drugs, so consumers have to be careful. But by itself, milky oat seed has no known contraindications and is reportedly safe for children and infants. It is good for the heart, helps insomnia, and a natural stress buster with no bad side effects!

"Last, the farmer harvests his seed.
Then, he stands and takes his ease,
Stamps his foot and claps his hands,
And turns around to view his land."

In case you don't get to harvest the milky oat seeds in that one week period, you can enjoy a drink of oatmeal as a general tonic. Groats, oats, and a bowl of oatmeal in the morning ... these are some of my favorite things! 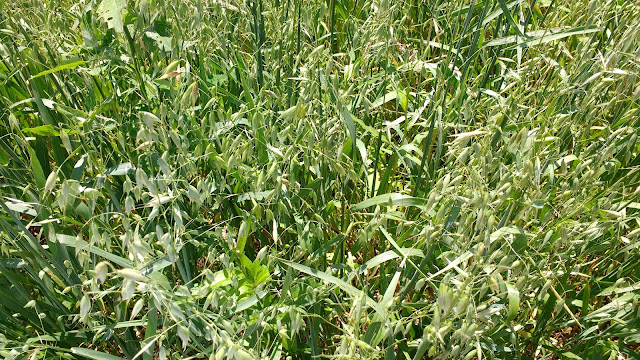 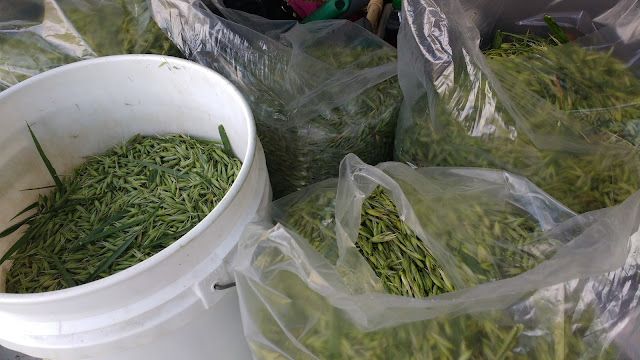 (This post is for your reading and may not be construed as medical advice or instruction. No action or inaction should be taken based solely on the contents of this information; instead, readers should consult appropriate health professionals on any matter relating to their health and well-being)


Posted by Lancaster Farmacy at 12:30 AM